What's Next On the Back-to-Office Fashion Front 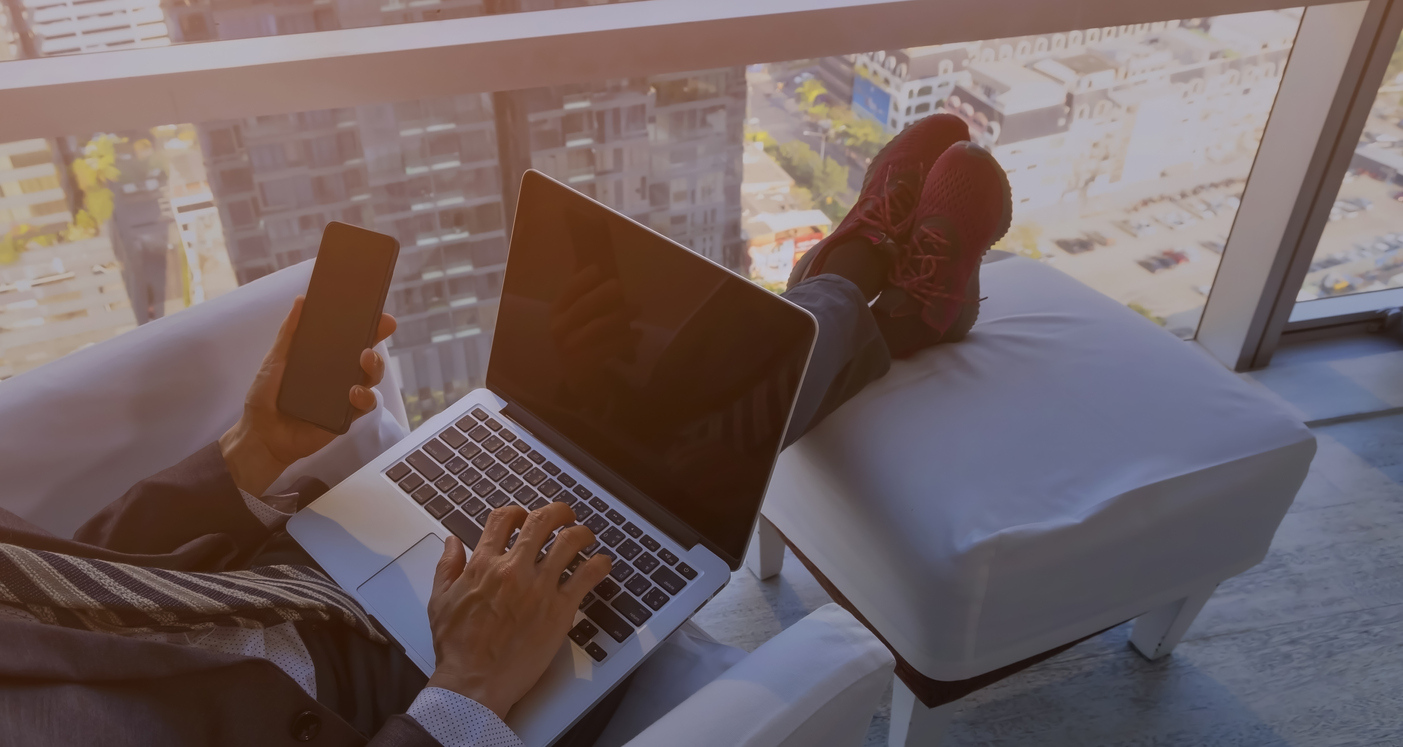 It doesn’t seem that long ago when getting ready for work meant perfecting the mullet of pandemic dressing---business on top, Netflix, and maybe-take-a-nap-later on the bottom. We ditched our dark suits and opted for a look we hoped read “comfortable professionalism” across the Zoom screen, all the while wondering if pants with cumbersome design details like buttons and zippers would ever be worn again. Now that many of us have returned to the office in some capacity, we have answers—and yes, they involve pants.

This new season brings opportunities to sharpen one’s sense of individuality while leaning into “Power Casual” or “Business Comfort” adopted at offices across the country. Fall is coming; more employees are heading into an office and style standards are evolving. Embracing the concepts of soft structure and personalization is key to adapting to the newest normal.

Some Blue-Chip companies started introducing the idea of a relaxed dress code before social distancing and virtual happy hours were a part of the zeitgeist. In March 2019, Goldman Sachs announced employees could shift away from the traditional suit and tie to reflect the changing nature of the workplace. Fortune Magazine reported the change, sent via internal email by the bank’s CEO, CFO, and president. They said they hoped the update would “provide flexibility for our people and create a welcoming environment for all.” The trio also instructed its employees to “dress in a manner consistent with your client’s expectations.”

Goldman Sachs certainly couldn’t have anticipated just how low those expectations would go when everyone was working from home, especially in the early days of the pandemic; so much was unknown, and what anybody wore was the least of the concerns. As time rolled on (even when the days blurred from one to the next) it was evident corporate America was still mindful of keeping up some kind of appearances, and free-flowing, nonrestrictive workleisure hit just the right style note.

That was then, however, and this is now. The recent Business of Fashion/McKinsey State of Fashion 2022 report revealed consumer preferences for leggings and sweatshirts are waning. After focusing on loungewear and sportswear for nearly two years, analysts say consumers will reallocate wallet share to other categories as pent-up demand for newness coincides with more social freedoms outside the home. Hybrid-office patterns have many drawing inspiration from structured jackets in the form of casual blazers. In fact, the BOF/McKinsey report notes global search volumes for blazers were more than 100 percent higher in August 2021 than in August 2019.

Indeed, companies such as Lululemon and Athleta have discovered opportunities in the disruption, expanding into workwear. At the same time, Hugo Boss and Russell Athletic joined creative forces for BOSS x Russell Athletic, a sportswear collaboration featuring suiting in jersey fabric.

“Boss has dressed new generations in high comfort and impeccable style, while Russell Athletic has a long heritage in leisure and sportswear, inventing the first sweatshirt on the way. Bringing these two brands together gave us the chance to get really creative, and we’re excited to show this collaboration,” HUGO BOSS Chief Brand Officer Ingo Wilts said.

That kind of creativity is certainly a boon for designers and employers who have instituted the Power Casual/Business Comfort dress codes. It’s also a way to keep employees engaged with hybrid work. In its 2022 clothing forecast, Stitch Fix, a personal styling service that sends individually picked clothing and accessories items for a one-time styling fee, reports in one survey, at least one-third of respondents said they would take a 10% pay cut over having to get dressed for work every day. Deemed a “soft start” by many work-from-home employees, the thought of answering emails while still in pj’s instead of pants has become an ideal way to start the day.

It’s true that style expectations have changed, not just because of the pandemic. The Alexander Group and Alex & Red team members note more casual trends started even before remote work and often depend on geographic location.

TAG Managing Director John Lamar is one of the country’s foremost leaders of C-suite global law firm searches, traveling extensively to collaborate with clients in their home cities. It’s a rare occasion when he packs a suit and tie.

“Pre-pandemic, the coat and tie thing had faded away. When I visit a firm in New York or D.C., I typically wear a sports jacket with no tie. In California, a nice dress shirt is really all you need. Anything more formal, and you stand out like a sore thumb,” Lamar said.

“It was an interesting mix. There were no denim jeans but a couple of pairs of black jeans and more informal footwear. The firm we visited had ensured everyone had a standing desk, and the receptionist was in sneakers, standing at her desk,” Parker Rosecrans said. She notes leadership was in suits, but Mann donned dress pants and a sportscoat, no tie, and Parker Rosecrans chose a business casual style of wide-leg pants and top.

As with much of post-Covid life, many are leaning into what makes them the happiest—from working preferences to getting dressed. Moving forward, office wear will be a mix of individuality and comfort. We discussed what’s next with a fashion industry insider who said women wore office dresses and other work-appropriate clothing before the pandemic, but as cozy comfort took over, the all-important “Zoom tops” in knits and sweaters became the go-to. Now, women are still wearing blazers but pairing them with denim and embracing color and pattern.

“As we’re ushering people back to the office two to three times a week, we're noticing she wants to be seen more. She wants to experiment more. And the dress code has gotten more casual. When you think about it, jeans are now acceptable at Goldman Sachs and Morgan Stanley,” our industry expert shared.

Sterling Woerner of Tom James, a bespoke clothier, specializing in men’s and women’s suiting, started seeing a shift in her client’s needs mid-pandemic. Gone were the requests for conservative suiting; instead, her clients wanted a new approach to professional wardrobing.

“I got calls non-stop from clients who requested updated casual wear,” Woerner said. “Before, people dressed similarly for five days in the office. Now, it’s about dressing for your day.”

Woerner’s client roster includes hospital CEOs, lawyers, and hedge fund managers, who still loved their custom suits, but needed direction. Woerner suggests smart, casual blazers for men and women when dressing for the office or client meetings. Blazers are a versatile wardrobe staple, playing well with everything from denim and chinos to dresses and, yes, even shorts (depending on your work environment, of course).

Her male clients are adding custom denim and chinos worn with untucked button-down shirts and sportscoats with casual pants and loafers. Woerner's female clients are shifting to warm earth tones, building capsule collections that include a dress, one to two pairs of pants, and a skirt.

“Every woman has a conservative color they lean toward, but they also have a power color they feel most confident in. Women are in just as many high-power roles, and a rich, pigmented suit is timeless and sophisticated,” Woerner said. “Professionals want elevated basics, but all my client’s wardrobes are much more expressive and personalized now.”

Indeed, self-expression is the most likely trend of all.

“Often it’s the case during times of crisis, people revert to shiny fabrics, bright colors, clothing that can inspire happiness,” said London-based trend forecaster Geraldine Wharry. “If you look at the 2008 [global financial] crisis, a couple of years after, there was the trend starting to really gain traction in bright clothing, almost clothing inspired by toy colors. In the US, patterned trousers and women’s garments in bright colors such as fuchsia, green, orange, and purple were more commonly sold out through 2021 versus 2020.”

Our fashion intelligencer confirms the data.

“There’s this shift in thinking you always tried to blend in at work. You didn't want to look different than everyone else. You always wore the black suit, or you were very polished, and there were these kinds of codes of dressing, and because that's out the window, a lot of individuality is coming through.”

So, consider the office your runway, and don’t be afraid to work it. Just remember to change out of your pajama pants before that in-person presentation.